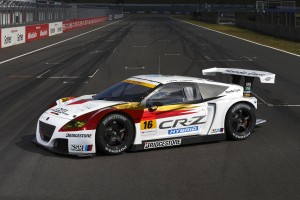 Shin Nagaosa, president of M-TEC Co., Ltd. (Hereinafter called M-TEC) today announced that TEAM MUGEN, with technical support from Honda, will join the Japanese 2012 SUPER GT SERIES competing in the GT 300 Class using a CR-Z equipped with a racing hybrid system. The new car will make its debut at the 4th round of the series to be held at SPORTSLAND SUGO, Japan in July 29.

The standard road car market has seen intensive development resulting in dramatic progress of Hybrid technology, and M-Tec believes that the development and integration of motor assist and/or regenerative energy systems will play an increasingly important role in the future motor sports environment. M-TEC joins the SUPER GT GT300 Class with CR-Z Hybrid in order to contribute to the intellectual growth of the company’s young engineers, helping them acquire and expand their knowledge in the use of these new technologies in a competitive atmosphere.

The nominated driver line-up of TEAM MUGEN for this GT300 challenge combines the highly experienced Hideki Muto whose prior knowledge of driving in SUPER GT GT500 and Indy car, will complement his youthful teammate, the highly-rated Daisuke Nakajima, younger son of former Formula One driver, Satoro.