Showing that even some of the worst weather that the daunting and mountainous German Nurburging ‘long’ circuit produces cannot defeat them, MUGEN EURO customer FUGEL SPORT took up where they left off in 2011 by winning the SP3 class in the first round of the 2012 VLN endurance championship. As through all of last year, the Chemnitz Mittelbach-based Team, part of AUTOHAUS FUGEL, took advantage of the driveability of the torquey MUGEN-developed and prepared K20 engine, which also has excellent top end power essential on the ‘Ring’s long straights, and the fine handling of their JAS Motorsport-developed HONDA Civic Type R chassis to capitalise on their thorough preparation and pit-work. 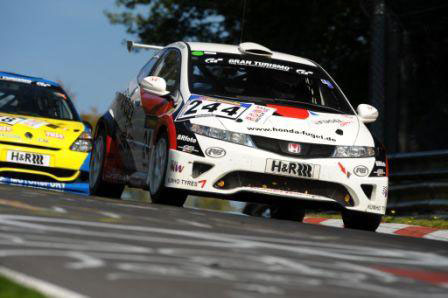 So bad were the conditions of rain and fog at “The Green Hell” that the race was shortened before the 3-hour mark, nonetheless Team Principal Markus Fugel and his co-driver came through with great speed and consistency to record their first victory of the new season, along with the fastest lap.

To add more fizz to the winners’ champagne, the Team’s Honda S2000 additional entry took 2nd place in the same class – what more cause for celebration than this, despite the difficulties of the day?

Next VLN event (all held on the Nurburgring long circuit) is a 4-hour race this coming weekend (14th April).