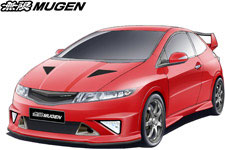 The car is being developed in Japan by MUGEN EURO – the Northampton-based subsidiary of Honda’s long standing tuning partner “MUGEN” – and will be brought to the UK for testing later in the year. At this stage, the car is being prepared purely as a prototype model.

There are currently no plans for a production model.