The challenge of participating in the Isle of Man TT electric motorcycle races, which is a new discipline to us and completely different from our core strengths as a manufacturer and developer of high-speed internal combustion engines, started in 2012 as our unique project to foster young engineers and conduct developments in a new area. We achieved our initial goal of 2014 which was to exceed an average speed of 115 mph (185 km/h), and in doing so captured the long-sought after victory, with a one-two finish for the team, in a time that beat the previous record lap record in the TT Zero Challenge class by more than one minute (00:19:17.3 lap).

For this year we will participate with a machine named “SHINDEN YON”, which has been newly developed to improve over last year’s model, “SHINDEN SAN”.

For this year, we will continue with John McGuinness and Bruce Anstey as our riders, and will strive to win our second championship in a row.

John has won the Isle of Man TT races 21 times in total, and took victory in the TT Zero Challenge class last year, while Bruce updated the outright course record for the mountain course with an average speed of 132.298 mph (00:17:06.682) during the TT races of 2014.

“SHINDEN YON” will be exhibited*2 at the 2015 Tokyo Motorcycle Show, which will be held at Tokyo Big Sight in March, 2015. 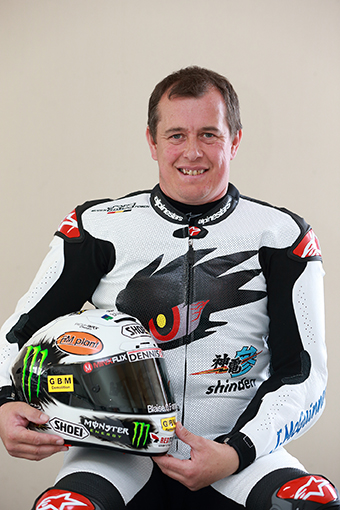 Began competing in the Isle of Man TT races in 1996, and, with 21 victories to date, he holds the record for the most wins of currently active riders.

Since 2012, he has been racing in the TT Zero Challenge class as a rider for TEAM MUGEN.

In 2014, he took a long-sought after first victory in the TT Zero Challenge class.

Is the current lap record holder for the TT Zero Challenge class, having substantially improved upon the existing lap record in 2014. 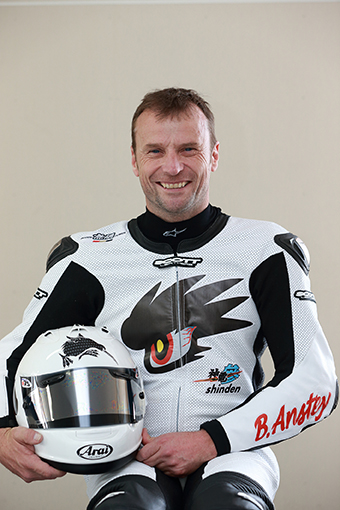 Made his Isle of Man TT debut in 1999 and currently has 9 TT victories to his name.

In 2014, he set an outright lap record for the Isle of Man TT Mountain Course with an average speed of 132.298 mph in the Superbike class.

In 2014, he made his debut in the TT Zero Challenge class with the machine “SHINDEN SAN”, earning a 2nd-place podium at his very first attempt on an electric motorcycle.