Honda Civic driver Tiago Monteiro stood proudly on the third step of the podium after a well-earned third place finish in Race 2 of the FIA World Touring Car Championship event at Termas de Rio Hondo, Argentina. His third place triumph in Race 2 was one place better than his race finish in the first race of the day and both results give him an early third position in the Driver’s Championship. Equally consistent and competitive was Castrol Honda team-mate Gabriele Tarquini with 5th and 4th place finishes to highlight the improved performance of the Civic WTCC cars. 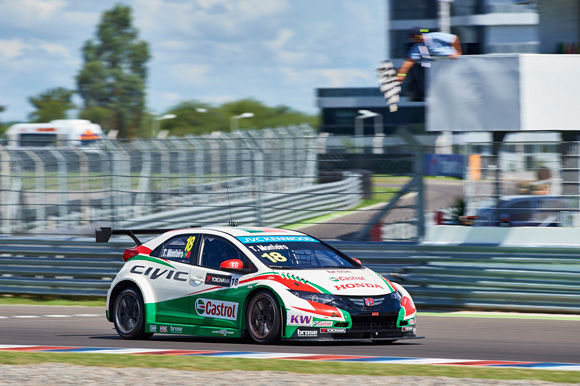 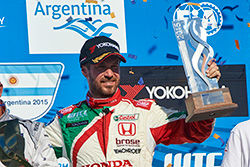 To add to this early season success Nobert Michelisz drove a stunning Race 1 to scythe through the field from the back row, gaining 11 places to finish Race 1 in 6th place overall. The brilliant young Hungarian matched this result again in Race 2 to finish the weekend runner–up in the Yokohama Trophy.

In Race 1 the fast starting Honda Civics of Tiago Monteiro and Gabriele Tarquini dived into the first corner to grab 4th and 5th places at the start of 13 hot, fast laps, positions they held to the checkered flag. The impressive drive from Norbert Michelisz underlined his talent once again. Having missed official qualifying yesterday due to his technical problem, the young Hungarian made a storming start and raced past many experienced drivers take 6th place at the checkered flag.

In Race 2 with the reverse grid, Gabriele was on the second row with Tiago right behind. When the lights went out the experienced Italian was immediately trying to pass the front row car and had to take to the grass in his efforts to secure the position at the first corner. By lap 2 Gabri was up to 3rd overall with Tiago fighting in traffic in 7th. A safety car period bunched the field and on the restart Tarquini was defending second place with Tiago moving forward. By lap 12 Gabriele was 3rd with Tiago 5th and challenging hard. On lap 13 the order was shuffled as the Portuguese took advantage when Gabriele went wide, slipping through to snatch 3rd overall with Tarquini 4th and Michelisz again powering forward from the back row to take another 6th place finish. 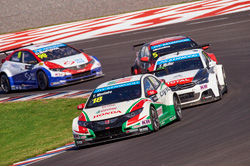 Following the champagne podium, the post-race press conference allowed Tiago to explain his race progress. “We are clearly  closer to the competition than last year and with more updates coming I am confident we will increase our challenge as the  season progresses. We will keep fighting and put pressure on them wherever we can. It was so horribly hot in the cars, I have  never driven in such heat. But we have done well and our results are reward for all the hard work of the team to get the season  underway with such positive results.”

For Gabriele the results and points are valuable. “It was good to start the season with points. I had expected us to be more  competitive than last year and I think we are but there is still more improvement needed to meet the big challenge of the  opposition. The next two events are very different to Argentina. Marrakesh is a street circuit with high kerbs and it is almost a lottery. Then Hungary is a much better circuit for the Civic so I hope we can gain even more performance by then.”

The results this weekend have proved to Alessandro Mariani, Managing Director, J.A.S Motorsport, that the developments are moving in the right direction. “This is the first step and has confirmed that we have solved the problems of last year. For sure the new parts that will arrive soon will be really effective. The team is working well and the drivers did an excellent job this weekend. I had not expected to be right at the top at the start of the season so I am satisfied with the results but we must work on the next stage of development quickly.”

The results in Argentina will be analyzed in detail. Daisuke Horiuchi, Large Project Leader for WTCC Development from Honda R&D confirms: “The engine mapping for this climate worked correctly and now we are looking to increase the speed through corners. After the next two races we can really measure our performance against the competition.”

Norbert Michelisz matched the speed of Tiago and Gabriele and received praise and rewards. “After the problem in qualifying it was a damage limitation exercise but we worked out the attack strategy, I had to make the cleanest starts and really force my position in the first two corners. It worked perfectly both time, especially in race 1. My Zengo Motorsport Civic was perfect with excellent balance and I had good tire grip right through the races. I was even catching Gabriele and Tiago but the gap to them was too great in the end. But I am happy to go away from here with these points for the Championship.”

Rickard Rydell also scored points for himself by bringing the Nika International Civic home a creditable 10th in Race 1 and 9th in Race 2. Dusan Borkovic drove the Proteam Racing Civic to 11th in Race 1 but retired from the second race after going off the circuit. 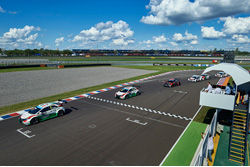