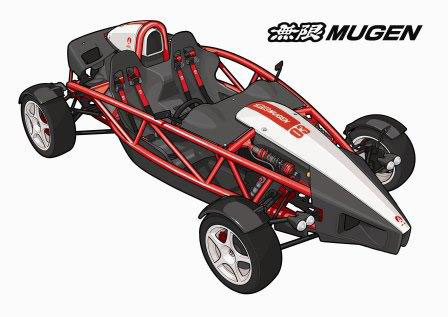 Celebrating 10 years of ARIEL ATOM production, a new special edition of this amazing and successful ‘No Screen, No Roof, No Doors’ pure sportscar is to be revealed at the Autosport International at the NEC in January – the ARIEL ATOM MUGEN. The result of collaboration between these two great names in high performance engineering is a limited-edition, track focussed car aimed at the enthusiast who wants the ultimate trackday car which can still be driven on the road.

MUGEN extensively re-works the HONDA K20Z Type R engine fitted in the ATOM with a number of special new components to significantly improve both top-end power and through-rpm-range torque. Particular attention is paid to re-mapping of the ECU to provide the instant response that makes a tuned normally-aspirated engine such a joy to drive.

According to Hiro Toyoda, Vice President of MUGEN EURO – “The Type R Honda is the best 2.0 litre normally aspirated engine available. We have put our experience and knowhow to release even more power from the engine and we’re delighted to see our engine in the ARIEL ATOM.”

The ATOM MUGEN cars will be identifiable by a specially-designed livery and each will be exclusively numbered and carry a plate signed by the MUGEN and ARIEL technicians responsible for the build of the car. “We found that both ourselves and MUGEN had the same meticulous attention to detail in the build of our cars and their engines.” said Simon Saunders of ARIEL. “One ARIEL technician makes a car, one MUGEN technician builds an engine. The result is a truly hand made car with a hand made engine.”