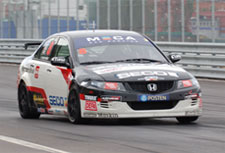 First time out with a MUGEN Super 2000 engine installed in his Engström Racing Honda Accord, top Swedish Touring Car Championship driver Tomas Engström won the second of the two races comprising the 3rd event of the STCC.

Against fierce opposition from works Volvos, Saabs and dealer-supported BMW’s, and a host of competitive Chevrolet, Alfa Romeo, Seat and Peugeot entries, Tomas used the first race to overcome the 10 grid spots penalty imposed by changing from his previous engine to put himself in a good position for race 2, which he duly won from the lights to the flag, despite severe pressure all through. 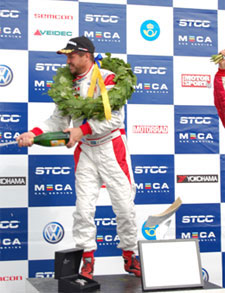 Commenting on Tomas Engström and his team’s great performance, Hiro Toyoda, Vice President of MUGEN EURO said: “Of course it is always very satisfying to win, especially on our debut in a new racing category. We like to feel that we have been able to add the final key element to the chassis, driver and engine combination essential in winning races. This is already a great partnership, and confident of the chassis development abilities of our good friends JAS Motorsport and the motivation and skill of Tomas and his team, we will make every effort to keep providing the most competitive engines so that Engström Motorsport can continue to beat the strong manufacturer-supported teams and keep HONDA’s name at the forefront of the STCC.”